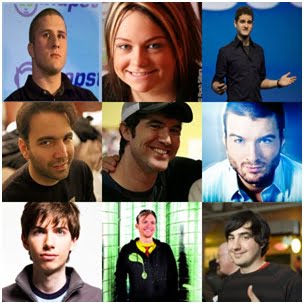 The list of one hundred of successful entrepreneurs contained the names of 10 people, whose activities are directly linked to the Internet.

YoungEntrepreneur.com has published the list of the entrepreneurs, who have managed to make a fortune of millions of dollars without  higher education.

The list compiled mostly American millionaires, the most famous of whom are Walt Disney, Thomas Edison, Henry Ford, Ingvar Kamprad (founder of IKEA), Frederick Royce (of Rolls-Royce), George Eastman (founder of Kodak), James Cameron. All of them even haven’t graduated from the colleges and universities, and some of them even haven’t received the secondary education.

The list of one hundred of successful entrepreneurs contained the names of 10 people, whose activities are directly linked to the Internet. “Ignorant” among well-known Internet entrepreneurs turned out to be:

Ashley Qualls, the founder of Whateverlife.com. She left the high school when she was 14, having an aim to devote herself to the creation of her business site. At 17  Ashley has already earned one million dollars.

Bram Cohen, the developer of BitTorrent, technology peer-to-peer. He had been studying at the university of Buffalo for only one year.

David Karp, the developer of blogging platform Tumblr. He left school at the age of 15 and continued self-education. He never studied at college.

Dustin Moskovitz, the multimillionaire,the co-founder of Facebook. He was expelled from Harvard after plunging into work on Facebook.

Jake Nickell, the co-founder and CEO of Threadless.com. He didn’t  graduate from college.

Jeffrey Kalmikoff,  the co-founder and chief creative director of Threadless.com. He didn’t  graduate from college, too.

Robert Kevin Rose, the founder of Digg.com. He abandoned college during the second year of his studies.

Pete Cashmore, the founder of Mashable.com, gave up his  studies at the age of 19.

Tom Anderson, the co-founder of MySpace, has left  high school.

Shawn Fanning, the developer of Napster. Shawn decided to leave the college at the age of 19.

Nokia Is Not Going To Open Symbian For Everybody