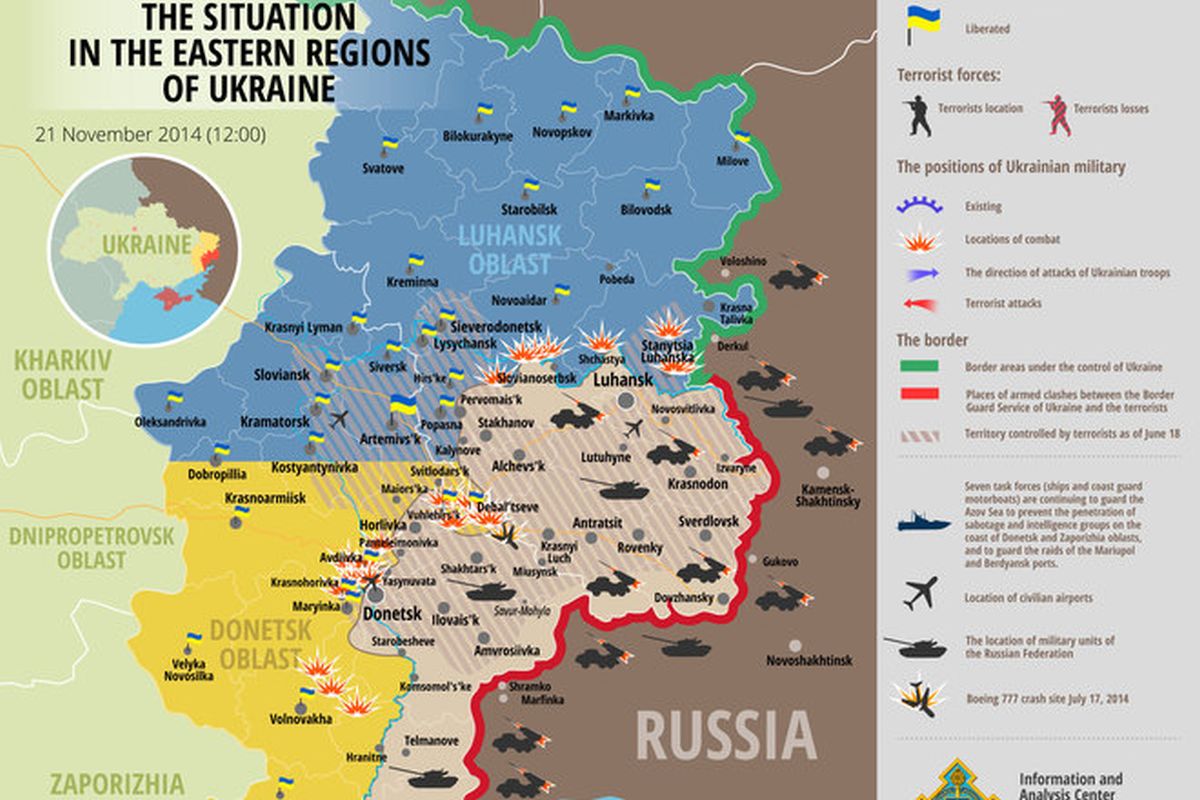 Russian-terrorist forces intensified at the borders of Ukraine: ATO map

Information-Analytical Center of the National Security of Ukraine published the current map of the zone of the ATO in the east of Ukraine, as of noon on 21 November.

According to authorities, the situation in the zone of antiterrorist operation remains tense.

Recorded movement of armed groups and terrorists armed forces units of the Russian Federation in the territory of Ukraine. Militants continue to fire and attack the positions of the forces on the ATO in Donetsk, Debaltsevsk, Lugansk, Mariupol directions and in the area of Bahmutivskoi track.

According to the State Border Service, for the last day for the first time since the conclusion of the Minsk agreements recorded updates shelling Ukrainian territory by the Russian Federation. Doing artillery fire from the territory of the Russian Federation is fixed at the direction of “Manotsky (RF) – Kamyshnaya (Ukraine)” in the area of one of the border posts of Lugansk detachment.

See also: Victory of Ukraine in the war with Russia predetermined by history – analyst

In Mariupol on the side of the road when passed Ukrainian military convoy, an explosion occurred. According to preliminary data, the radio-controlled explosive device worked. Wounded 2 soldiers.

In the area on a Lomakin land mine exploded  military vehicle ATO forces suffered two soldiers.

At the direction of Donetsk during the day militants fired from three mortars, tanks and small arms position of ATO forces and once again tried to storm the Ukrainian military position of on the airport. All attacks militants were successfully recorded, the terrorists have suffered losses. On the same direction terrorists from artillery, mortars and small arms fire on positions of multiple forces ATO, Glorious, Avdiyivka, Krasnogorovka, Peski, Verhnetoretskoe.

Losses over the past day until specified.

Clashes with the terrorists at the border outside the zone ATO, not happened.

During the day, after a short break, the enemy resumed aerial reconnaissance system in the area along the border demarcation and Ukraine.

See also: In Russia, seeking a “new king” to place of Putin

Biden to Poroshenko: no reform, no money

No Replies to "Russian-terrorist forces intensified at the borders of Ukraine: ATO map"