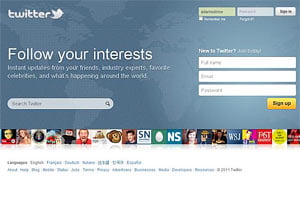 Microblogging service Twitter is entering a new home page design. Traditional blue tint service will change to blue metallic, right on the page, a window will appear the registration of new bloggers. To become a user of Twitter, will be sufficient to fill only three lines, said portal «Mashable».

This decision continues the trend Twitter «to be like Facebook». It has recently become known that in the near future, service will offer companies the ability to create separate pages that are related to corporate page on the social network Facebook. As reported by the publication Marketing Magazine, sources close to Twitter, through these pages, the corporation will be able to advertise their products and services, contests and so on.

Go to twitter feysbukovskomu interface should make it much more convenient for users, says adviser on Social Communications, «SM & Partners» Gene Kolesnikov. Twitter, like Kolesnikov, now plays for the audience network Facebook, but far ahead of her on the relevance of the information. This became especially clear during the tragedy in Japan and the Asian revolutions. Now, users who “sit in Facebook» much easier to be able to get used to the new service for them, “this is another plus sign to make to start an account there,” said the expert.

Change and the search for Twitter. Now in the center of the homepage is hosted on users’ search interests, this function appeared to Twitter recently. According to the newspaper «Mashable», this is the most radical change. In the old version of Twitter instead of searching for the interests offered to find out what’s happening in the world. “Search for – a very weak link Twitter», recalls Kolesnikov. However, polzovatelyampo remains to guess what keywords need to drive to get the right information. Lack of tag clouds – a huge minus, which still can not cope Twitter, the expert adds.

Last autumn, the microblogging service Twitter has changed its appearance. Significant changes undergone tape posts. Most of the navigation moved to the top of the site, were added keyboard shortcuts for faster operation with the service. Above the belt is now located the search button (Searches), subscription lists (Lists), as well as retweets (Retweets) and references (Mentions). Although the volume of posts will remain limited to 140 characters, she has become an endless tape: it is now supplemented by a mechanism of infinite scroll to Twitter users will no longer need to click on the button «More», to see additional entries.﻿