Screenshot of Italian Apple's site before and after . Source: Applerumors.it.

Apple removed all the images  of white iPhone 4 from their online store. The output of this  unit was planned for this spring.

According to  the 9 to Mac  website, on April. 6 Apple  briefly closed the  Apple Store  – it usually happens when the company introduces a new product. At the same time the only change in store was the disappearance of information  about white iPhone 4 out of inventory systems.

In addition, images of white iPhone 4  disappeared from the galleries, as well as from the description of plates, “bumpers” for the iPhone 4.

Screenshot of Italian Apple’s site before  and after . Source: Applerumors.it.

White iPhone 4 was supposed to appear on sale simultaneously with the black unit in June 2010. On June, 23 Apple announced that due to production difficulties white smartphone will be released in July. Then the release of it was postponed to the end of 2010, then – at the beginning of 2011, then – in spring. The fact that sales of white iPhone 4 will begin in spring was confirmed in the  microblog of senior marketing vice president of for Apple Phil Schiller.

The cause of delay, presumably, became the light transmission of the body of white iPhone 4. Because of this photographs made by the built-in camera were overexposed.

However, fans of iPhone, who dreamt of white  device, could make their dream true using  removable panels.  The disappearance of the white iPhone 4 from the Apple website most likely indicates that the device will never be on sale. Let’s  hope that iPhone 5  will be available for sale in black and white  colour. 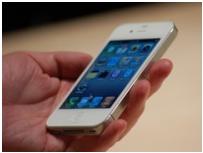